A nice overview of where the NGDLE concept was earlier this year. We really need to be thinking about this at AU because the LMS alone will not take us where we need to be. One of the nice things about this article is that it talks quite clearly about the current and future roles of existing LMSs, placing them quite neatly within the general ecosystem implied by the NGDLE.

The article calls me out on my prediction that the acronym would not catch on though, in my defence, I think it would have been way more popular with a better acronym! The diagram is particularly useful as a means to understand the general concept at, if not a glance, then at least pretty quickly… 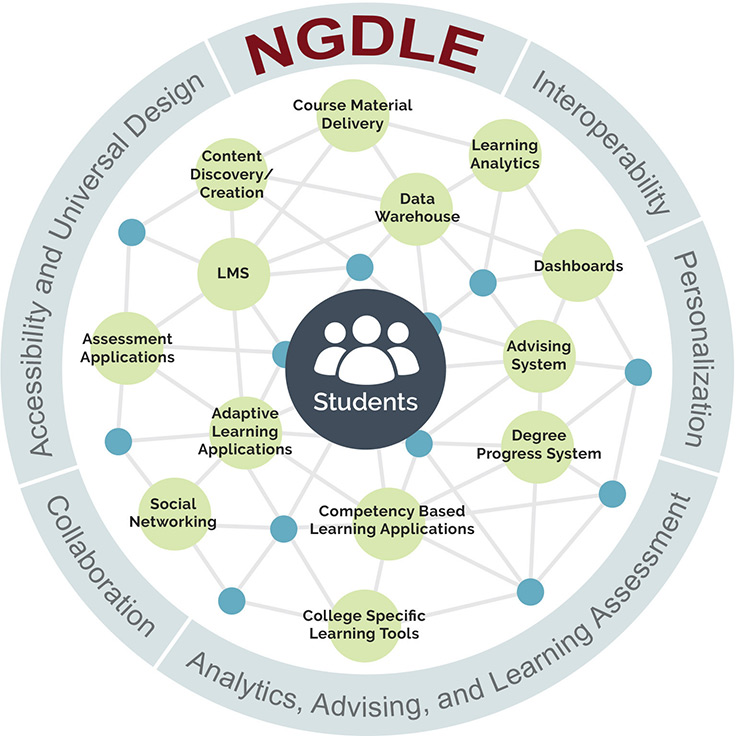 Address of the bookmark: https://er.educause.edu/articles/2017/7/the-ngdle-we-are-the-architects

Michael Feldstein responds on NGDLEs with a brilliant in-depth piece on the complex issues involved in building standards for online learning tool interoperability and more. I wish I’d read this before posting my own most recent response because it addresses several of the same issues with similar conclusions, but in greater depth and with more eloquence, as well as bringing up some other important points such as the very complex differences in needs between different contexts of application. My post does add things that Michael’s overlooks and the perspective is a little different (so do read it anyway!), but the overlapping parts are far better and more thoroughly expressed by Michael.

This is an idea that has been in the air and ripe for exploitation for a very long time but, as Michael says in his post and as I also claim in mine, there are some very big barriers when it comes down to implementing such a thing and a bunch of wicked problems that are very hard to resolve to everyone’s satisfaction. We have been here before, several times: let’s hope the team behind NGDLE finds ways to avoid the mistakes we made in the past.

Address of the bookmark: http://mfeldstein.com/the-educause-ngdle-and-an-api-of-ones-own/

Malcom Brown has responded to Tony Bates and me in an Educause guest post in which he defends the concept of the NGDLE and expands a bit on the purposes behind it. This does help to clarify the intent although, as I mentioned in my earlier post, I am quite firmly in favour of the idea, so I am already converted on the main points. I don’t mind the Lego metaphor if it works, but I do think we should concentrate more on the connections than the pieces. I also see that it is fairly agnostic to pedagogy, at least in principle. And I totally agree that we desperately need to build more flexible, assemblable systems along these lines if we are to enable effective teaching, management of the learning process and, much much more importantly, if we are to support effective learning. Something like the proposed environment (more of an ecosystem, I’d say) is crucial if we want to move on.

It has been done before, over ten years ago in the form of ELF, in much more depth and detail and with large government and standards bodies supporting it, and it is important to learn the lessons of what was ultimately a failed initiative. Well – maybe not failed, but certainly severely stalled. Parts persist and have become absorbed, but the real value of it was as a model for building tools for learning, and that model is still not as widespread as it should be. The fact that the Educause initiative describes itself as ‘next generation’ is perhaps the most damning evidence of its failure.

I was not a part of nor close to the ELF project but, as an outsider, I suspect that it suffered from four major and interconnected problems:

As far as I can tell, any implementation of the proposed NGDLE is going to run into exactly the same problems. Though the components described are contemporary and the odd bit of vocabulary has evolved a bit, all of them can be found in the original ELF model and the approach to achieving it seems pretty much the same. Moreover, though the proposed architecture is flexible enough to support pretty much anything – as was ELF – there is a tacit assumption that this is about education as we know it, updated to support the processes and methods that have been developed since (and often in response to) the heinous mistakes we made when we designed the LMSs that dominate education today. This is not surprising – if you ask a bunch of experts for ideas you will get their expertise, but you will not get much in the way of invention or new ideas. The methodology is therefore almost guaranteed to miss the next big thing. Those ideas may come up but they will be smoothed out in an averaging process and dissenting models will not become part of the creed. This is what I mean when I criticize it as a view from the inside.

Much better than the LMS

If implemented, a NGDLE will undoubtedly be better than any LMS, with which there are manifold problems. In the first place, LMSs are uniformly patterned on mediaeval educational systems, with all their ecclesiastic origins, power structures and rituals intact. This is crazy, and actually reinforces a lot of things we should not be doing in the first place, like courses, intimately bound assessment and accreditation, and laughably absurd attempts to exert teacher control, without the slightest consideration of the fact that pedagogies determined by the physics of spaces in which we lock doors and keep learners controlled for an hour or two at a time make no sense whatsoever in online learning. In the second place, centralized systems have to maintain an uneasy and seldom great balance between catering to every need and remaining usably simple. This inevitable leads to compromises, from small things (e.g. minor formatting annoyances in discussion forums) to the large (e.g. embedded roles or units of granularity that make everything a course). While customization options can soften this a little, centralized systems are structurally flawed by their very nature. I have discussed such things in some depth elsewhere, including both my published books. Suffice to say, the LMS shapes us in its own image, and its own image is authoritarian, teacher-controlled and archaic. So, a system that componentizes things so that we can disaggregate any or all of it, provide local control (for teachers and other learners as well as institutions and administrators) and allow creative assemblies is devoutly to be wished for. Such a system architecture can support everything from the traditional authoritarian model to the loosest of personal learning environments, and much in between.

NGDLE is a misnomer. We have already seen that generation come and go. But, as a broad blueprint for where we should be going and what we should be doing now, both ELF and NGDLE provide patterns that we should be using and thinking about whenever we implement online learning tools and content and, for that, I welcome it. I am particularly appreciative that NGDLE provides reinvigorated support for approaches that I have been pushing for over a decade but that ICT departments and even faculty resist implacably. It’s great to be able to point to the product of so many experts and say ‘look, I am not a crank: this is a mainstream idea’. We need a sea-change in how we think of learning technologies and such initiatives are an important part of creating the culture and ethos that lets this happen. For that I totally applaud this initiative.

In practical terms, I don’t think much of this will come from the top-down, apart from in the development of lightweight, non-prescriptive standards and the norming of the concepts behind it. Of current standards, I think TinCan is hopeful, though I am a bit concerned that it is becoming over-ornate in its emerging development. LTI is a good idea, sufficiently mature, and light enough to be usable but, again, in its new iteration it is aiming higher than might be wise. Caliper is OK but also showing signs of excessive ambition. Open Badges are great but I gather that is becoming less lightweight in its latest incarnation. We need more of such things, not more elaborate versions of them. Unfortunately, the nature of technology is that it always evolves towards increasing complexity. It would be much better if we stuck with small, working pieces and assembled those together rather than constantly embellishing good working tools. Unix provides a good model for that, with tools that have worked more or less identically for decades but that constantly gain new value in recombination.

Footnote: what became of ELF?

It is quite hard to find information about ELF today. It seems (as an outsider) that the project just ground to a halt rather than being deliberately killed. There were lots of exemplar projects, lots of hooks and plenty of small systems built that applied the idea and the standards, many of which are still in use today, but it never achieved traction. If you want to find out more, here is a small reading list:

http://www.elframework.org/ – the main site (the link to the later e-framework site leads to a broken page)

http://www.elframework.org/projects.html  – some of the relevant projects ELF incorporated.

https://web.archive.org/web/20110522062036/http://www.jisc.ac.uk/uploaded_documents/AltilabServiceOrientedFrameworks.pdf  – spooky: this is about ‘Next Generation E-Learning Environments’ rather than digital ones. But, though framed in more technical language, the ideas are the same as NGDLE.

See also https://web.archive.org/web/20090330220421/http://www.elframework.org/general/requirements/scenarios/Scenario%20Apparatus%20UK%205%20(manchester%20lipsig).doc and https://web.archive.org/web/20090330220553/http://www.elframework.org/general/requirements/use_cases/EcSIGusecases.zip, a set of scenarios and use cases that are eerily similar to those proposed for NGDLE.

If anyone has any information about what became of ELF, or documents that describe its demise, or details of any ongoing work, I’d be delighted to learn more!

This is a preprint draft of a paper that has been translated by the exceptionally talented Junhong Xiao (he always gives the best and fastest feedback I’ve ever received on any of my work, and he does the translations) for publication in a forthcoming (likely August) edition of the open Journal of Distance Education in China. I’ll be touting it for publication in English so, if you’ve got an open journal that might want it or something like it, drop me a line: it’s a 10,000 word paper but I could shrink it to fit journal needs if that’s too Read More

Get my previous books…