Hat-tip to Tim Terry (@tterry) for sharing this one from Phil Hill.

tldr; – Blackboard and its acquisitions continue to shrink (great!), Canvas continues to grow (good), Moodle continues to thrive (very good), partly driven by Blackboard’s hosted version in MoodleRooms (not so good). Of the rest (a tiny fraction of the big three), Desire2Learn is still growing market share and Sakai trundles along as it has for over a decade. Homegrown solutions have dwindled to a neglible fraction of the whole, though it is worth noting that Moodle (especially), Canvas (to an extent), and Sakai are highly customizable as they are open source (or, in Canvas’s case, open core), and that all allow use of plugins of some form or another, so the fact few are running systems built from scratch does not imply that everyone is running baseline systems. 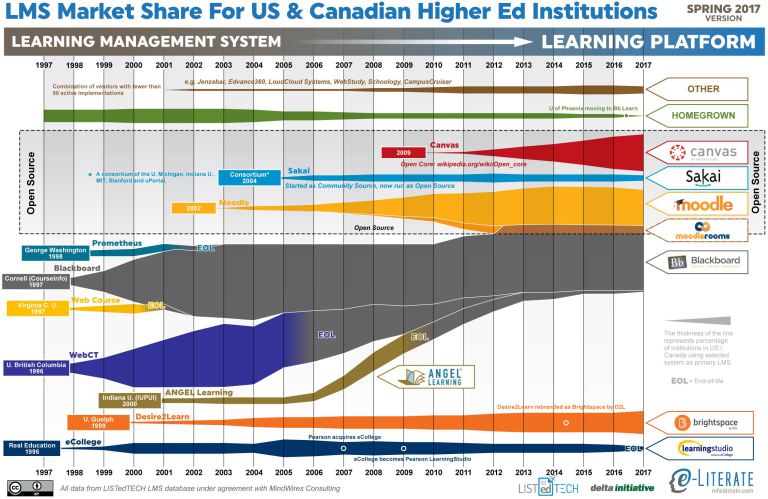 The battle between open and closed source systems looks fairly evenly matched right now, on the surface, but that is largely due to Blackboard’s slowly-decreasing momentum. When you take into account that, up to 10 years ago, it and its acquisitions held a large majority of the market, it looks like open systems are the big winners. However, a note of caution is needed here.  Canvas’s ambivalent approach and an increased move to cloud hosting, usually with proprietary pieces sneaking in through the back door (especially in Blackboard’s MoodleRooms foray), cast a shadow on that. The big commercial players are starting to notice that it only takes a little bit of lock-in to trap people in a system, so they can benefit from the reduced need for development that the use of open source entails for them, while still trapping their users as they have always done with relatively small, closed, euphemistically named ‘value-added’ services that, in the long run, are anything but. Cloud systems only make sense when they can be directly replaced with alternative cloud (or self-hosted) systems, with little or no disruption, lost functionality, or data loss. That largely limits the options to those that use open source and/or exclusively open protocols, or those that are more or less completely ephemeral and that store no significant data. Sadly, that doesn’t seem to be the direction cloud hosting is taking right now.

I predict that there will be an increasing demand in coming years for migration specialists that are able to negotiate the complex business, legal, social, and technical problems of moving between cloud providers. They will be able to charge through the nose because they will save large fortunes for trapped companies. There are also killings to be made by cloud hosts that can successfully suck everything from other cloud hosts, though buyers should beware that they may just be moving from the frying pan into the fire. Long-time masters of lock-in, like Blackboard and Microsoft, will do everything in their power to prevent migration away from them, shifting formats, obfuscating data, subtly breaking protocols and standards, adding unnecessary but desirable tools, retiring systems that are too easy to back out of, and adjusting their prices to make it just a bit more expensive to leave them than to stay. Such techniques have worked for them for years even before the cloud got to be a big thing, but it is so much easier for them now they have their hands on actual company data. Smart companies will avoid falling prey to them in the first place.

Address of the bookmark: http://mfeldstein.com/state-higher-ed-lms-market-us-canada-spring-2017-edition/

I am a professional learner, employed as a Full Professor at Athabasca University, where I research lots of things broadly in the area of learning and technology, and I teach mainly in the School of Computing & Information Systems, of which I am the former Chair. I am married, with two grown-up children, and live in beautiful Vancouver.