Interesting reflections in Scientific American on morbid curiosity – that we are driven by our curiosity, sometimes even when we actually know that there is a strong likelihood it will hurt us. In the article, as the title implies, this is portrayed as a bad thing. I disagree.

“The drive to discover is deeply ingrained in humans, on par with the basic drives for food or sex, says Christopher Hsee of the University of Chicago, a co-author of the paper. Curiosity is often considered a good instinct—it can lead to new scientific advances, for instance—but sometimes such inquiry can backfire. “The insight that curiosity can drive you to do self-destructive things is a profound one,” says George Loewenstein, a professor of economics and psychology at Carnegie Mellon University who has pioneered the scientific study of curiosity.” 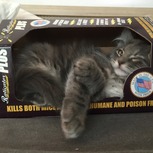 This is not exactly a novel, nor a profound insight: we even have a popular proverb for it that I mention to my cats on an almost daily basis. They don’t listen.

There is a strong relationship between curiosity and the desire for competence: a need to know how things work, how to do something we cannot yet do, why things are the way they are, where our limits lie, how to become more capable of acting in the world. From an evolutionary perspective we are curious with a purpose. It allows us to make effective use of our environment, to become competent within it. This is really good for survival so, of course, it is selected for. That it sometimes drives us to do things that harm us is actually a very positive feature, as long as it is balanced with a sufficient level of caution and the harm it causes is not too great. It helps us to know what to avoid, as well as what is useful to us. It also helps us to be more adaptable to bad things that we cannot avoid. It makes us more flexible, and lets us both know and extend our limits.

The first experiment described here involved people playing with pens even knowing that some were novelty items that would give them an electric shock. I’m not sure why the researchers mixed in some harmless pens in this because, even when pain is an absolute certainty, curiosity can drive us to experience it. I have long used electrostatic zappers that are designed to alleviate the itch in mosquito bites by administering a sharp and slightly painful shock to the skin. I have yet to meet a single child and have met very few adults that did not want to try it out on their own skin, regardless of whether they had any bites, in the full and certain knowledge that it would hurt. This is described in the article as self-destructive curiosity but I don’t think that’s right at all. If subjects had been convincingly warned that some pens would kill or maim them, then I am quite certain that very few would have played with them (some might, of course – evolution thrives on variation and, in some environments, high-risk strategies might pay off). But being curious about what kind of pain it might cause is really just a way of discovering or achieving competence, of discovering how we cope with this kind of shock, of testing hypotheses about ourselves and the environment, as well as finding out whether such joke pens actually work as advertised. This is potentially useful information: it will make you less likely to be a victim of a practical joke, or perhaps inspire you to perform one more effectively. Either way, it’s probably not a big thing in the grand scheme of things but, then again, very few learning experiences are. The value is more about how we integrate and connect such experiences.

The article describes another experiment in which participants were encouraged to predict their feelings after being shown an unpleasant image. Those so primed were less likely to choose to see it. Again, this makes sense in the light of what we already know. We are curious with a purpose – to learn – so, if we reflect a bit on what we have already learned, then it might dull our curiosity to experience something bad again. That’s potentially useful. I’m not sure that it is always a good thing, though. I happen to like, say, some horror movies that disgust me, or comedies that rely on discomfort for their humour. In fact, the anticipation of fear or disgust is often one of the main things that drives their plots and keeps my eyes glued to them. If the zombie apocalypse comes, I will be totally prepared. It also prepares me better for things that are going to really upset me. Likewise for funfair rides, sailing on a breezy day, exercising until it hurts, eating hot chili, or struggling with difficult deadlines.

So while, yes, we absolutely should learn from experience, we also need to remember that it can lead us into fixed ways of thinking that can, when conditions change, be less adaptable and adaptive. There is an ever-shifting balance between fear and curiosity that we need to embrace, perhaps especially when curiosity leads to the likelihood of something unpleasant (though not too unpleasant) happening. And, even when the danger is great, there are also risks that are sometimes worth taking. ‘What if..?’ is one of the most powerful phrases in any language.

Address of the bookmark: http://www.scientificamerican.com/article/curiosity-is-not-intrinsically-good/

I am a professional learner, employed as a Full Professor at Athabasca University, where I research lots of things broadly in the area of learning and technology, and I teach mainly in the School of Computing & Information Systems, of which I am the former Chair. I am married, with two grown-up children, and live in beautiful Vancouver.